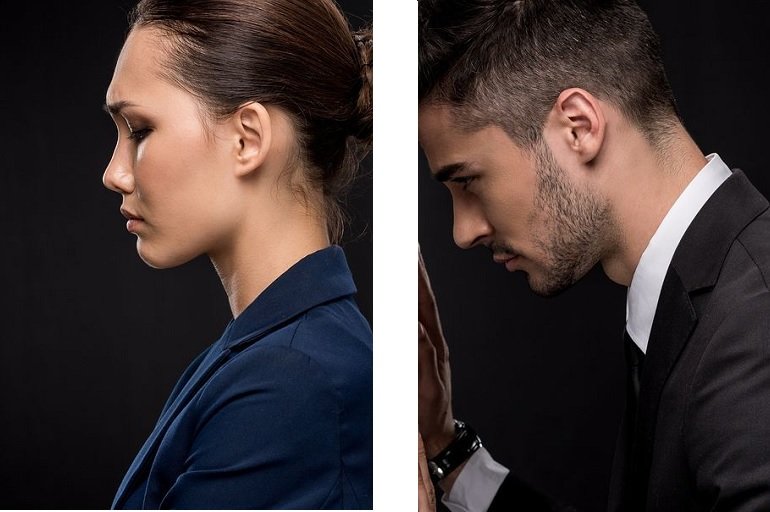 In some cases, the people involved are in so deep that what to some appears mismatched feels normal to them. Something about the relationship feels so familiar, even safe in a twisted kind of way.

See if you can relate to any of these types of mismatched relationships:

The first thing you notice about this mismatched relationship is the huge age difference. The second is the toxic communication pattern of yelling, tantrums, silent treatment, mind games and  manipulation.

People who get into parent-child relationships have an intense need to recreate or compensate for the relationship they had with their own parent. Regardless of the psychological reasons behind this kind of relationship, the “re-parenting arrangement” reinforces the dysfunctional and toxic behaviour carried on from childhood. You know this is not how a healthy relationship should be, but you have no idea how to make it right, or even want to make it right.

This is where someone sacrifices and gives up everything, including their mental/emotional well-being all in the name of love.

In your desperate need to be loved, you give and give; and nurture and nurture to a point where the relationship is unbalanced and unhealthy. Because you believe that being “a martyr to love” makes you a loveable person, you tell yourself your love is unconditional but actually it is very conditional and selfish. Even when the relationship is abusive, you feel that you must really love this person to sacrifice and give up everything, though you can’t understand why you’d love someone who treats you badly.

Most people who get into these relationships are convinced on some level that they can change the other person and make them a “better” person.

Even faced with the reality that the other person will not change, you can’t accept and break free of the illusions of the “power to change someone” that you have created. In some way you actually feel “responsible” for the other person, and see leaving as abandoning them. But as they say, a man who marries a woman to “educate” her falls a victim to the same fallacy as the woman who marries a man to “reform” him.

Financier mismatch is when one person provides financial security; and the other person feels obligated to the person who “pays the bills”.

The only reason the mismatched relationship works is because one person feels obligated to support the other; and the other person feels obligated to stay in the relationship; because they have  no other way to financially support yourself. Both people feel entitled to the “investment” they have made; and won’t let the other person eat their cake and have it too.

Because the relationship is more about money; the only thing you seem to agree on most of the time is the colour of money. It is the currency of communication, sexual intimacy and whatever else.

It’s always about one or the other feeling lonely, isolated, insecure, unloved, or like the “outsider”; especially around the other’s socio-cultural networks.

Rebel-type daters choose a partner, who is exactly the opposite of everything their families and friends would want for them.

You may be angry with your parents, family or friends and trying to get back at them for being racist or homophobic, or you may be attempting to establish your own identity different from the identity of your family or friends, but if you get a kick from watching your parent’s, sibling’s or friend’s reaction to your partner more than you actually get from the relationship, the relationship is simply “entertainment” and your partner a pawn in your reality TV Show.

This is when one or both people get into a relationship to have access to the other’s social circle; widen their social circle, or advance themselves up the social ladder.

At first glance, everything looks “picture perfect”; but a deeper look reveals that you are a mere extension of a calculated social equation. Though this is a touchy subject that neither of you necessarily wants to talk about, one or both of you somehow manages to never let the other person “forget” who is dating up or dating down, who married up or married down the social ladder.

8.  The “Friends Without Benefits” Mismatched Relationship

This kind of relationship is usually based on a great friendship; a close and mutual bond cemented by many years of being each other’s best friend. The sexual attraction/chemistry may or may not have been there in the initial stages, but you feel obligated to stay with each other because you see eye to eye in almost all areas of your lives.

Though there is no sexual attraction between the two of you and you are not even physically sexually intimate, one or both of you feels jealous and rejected if the other is sexually attracted to someone else and feels betrayed and hurt if the other even mentions that they have unmet sexual needs. You feel that if you don’t feel like having any or aren’t getting any, neither should they!

Bottom line: When we have toxic or dysfunctional relationships with others, it means we have a toxic relationship with ourselves.  Remove what you view to be a toxic person from the relationship, and you are left on your own with only the mirror to look at.

In other words, relationships are nothing but mirrors of ourselves; reflecting back to us the healthy/good and the ugly/unhealthy that’s already in us. Removing the “mismatched person” from one’s life without removing the what you are drawn them in the first place; is only removing the mirror.

Committing yourself to really let go off old patterns of relating is a better alternative to pining for your last love and waiting for your next heart break.

10 Signs You’re Forcing A Relationship And Trying Too Hard