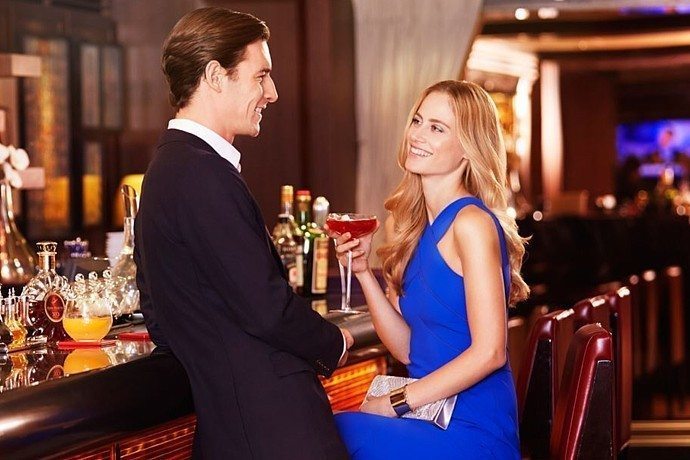 One of my very favourite pastimes is watch people interact with each other.

The other day, I was at a party and saw this really gorgeous woman flash an enticing smile in the direction on a group of guys looking at her as she walked in. A few minutes later, a well-dressed guy, a drink in hand, sauntered over to the woman and said “Hi”. I was close enough and was unfortunately forced to hear all the conversation. Okay, okay… may be I was a little too interested, but I have a perfectly good excuse. I am a love coach… I was doing research!

The 30 or 40 something guy was saying something about him being an investment analyst with an MBA or something. The woman simply looked at him and said “So…?”, while at the same time craning her neck to see who else was in the room. The well-dressed guy seemed to get the message and slowly sauntered back to his group of friends who were not hiding their amusement.

I moved closer to the woman, and in my natural friendly way asked “What was that about?” With a wave of the hand she said “Boring, no personality.” I smiled, winked and said “I know.”

Now, I am sure like most guys, Mr. Investment Analyst was wondering; “Why would she be like that to me?” and like many guys, concluded that it had to do with him not being “powerful” enough or “rich enough” — or that she was simply a man-hater.

Forget the power/money/status argument for a moment. What did this man do or not do that caused him to be dismissed with just one word “so?” . Where did he slip up? It certainly wasn’t his dress and demeanor, and he had the guts to walk up to such a beautiful woman and put himself and his ego on the line. But there was an ace card missing in his deck of cards.

Consider this, when you talk with someone, where does your conversation focus?

Most men and women begin conversations by discussing ordinary everyday stuff like the weather, what they do for a living, and the slow line at the ticket booth or something equally mundane. Such conversations quickly become stale because they try to make a conversation interesting by focusing on the topic and factual content (trying to show that you are someone intelligent) and rambling on and on.

I’ve had people (men and women both!) come to me who say they met someone who seemed to tick all the right boxes, yet for some reason they could not bring themselves to give the person 10 out of 10 because they seemed to be lacking a certain something.

Despite our ability to “interview” our dates and have hundreds of Facebook friends and twitter followers, most of us do not know how to go beyond “information gathering” to making a real strong emotional connection and bond that lasts a long time. Most conversation never lead to excitement and romance, and most dates never become relationships because there is nothing emotionally exciting about the way we engage each other.

You may be intellectually stimulating with a voice that is tender and empathic, but have nothing else to talk about except your job and “intellectual” accomplishments. You may have charisma with eyes that are clear, shiny, and affirming, but are confrontational and argumentative. Or you may be warm and cuddly as a teddy bear, but getting more than a sentence out of you is like being de-toothed without anesthetic.

The reality of dating life is that people crave other people who can make interactions personal, real, and exciting. The “personal” makes a conversation compelling and engages others in an emotional way. When we talk about topics with emotional component, things we’ve actually experienced and things we genuinely care about, we easily become more animated and more alive – which is very attractive to most people.

The key is to make yourself easy for others to relate to. I could have said to the gorgeous woman “Hi, my name is…. I am a love coach…blah, blah, blah”. And yep! you guessed it. She might have said “SO?”. But approaching her the way I did kind of suggested to her that I probably have had similar experiences and can relate to how she was feeling. With so little effort I not only made myself easy to relate to but also created an emotional connection.

Our male-female interactions and relationships could be better if we learned to reach out, relate and connect with each other in a completely different way. Male-female interaction need those generous moments filled with awe-inspiring variety, closeness, completeness and wholeness. This requires that we give up our hyper vigilant or high-strung temperaments. You can’t be fun, easy, relaxed and relatable when you’re suspicious, calculating, or angry at the opposite sex.

We all could all benefit a great deal from reconnecting with our thinking and feeling body – our natural human warmth. Lack of human warmth in our interactions with the opposite sex is what lurks at the bottom of the growing feeling that things are no longer “right” between the sexes.