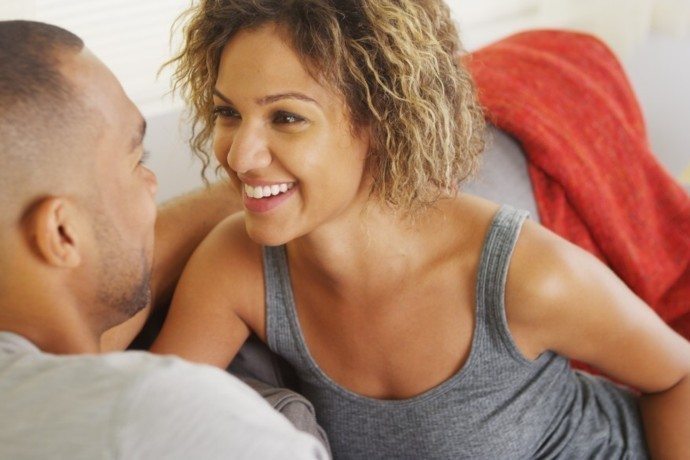 In this article, I will focus on how to trigger emotions and feeling that make him want you more and stimulates him into action. This may sound like an old wives’ tale, but believe me, it works!

But this is also where most women fail themselves, especially if they’ve already “caught” the man. They think “he’s now my boyfriend/husband the rest will take care of itself; and we will live happily ever after”. Mistake! Big mistake.

The reason your man was fun, interesting, exciting and sexually intense when you were dating and courting each other is because you were flirting and seducing him; and in the process trigger emotions and feeling that made him want you more. When you stopped, he stopped feeling those feelings. He lost the inspiration.

If dating and courting is an invitation to a purchase, the way you seduce your man is your brand

By constantly evoking the emotions that fit with his aspirations, fulfill his emotional needs, and spark his fantasies, you’re demonstrating to him why he loves you and needs more of you around him — and not just for sex.

Studies have shown men who enjoy the company of their women are more loyal, committed and creative, in addition to experiencing satisfaction in the relationship. So fill him with feelings of confidence, encouragement, fun, excitement, arousal and sense of personal growth.

Problem is, you can’t do this if you’re most of the time complaining, nagging, angry, unforgiving, uncompromising, punishing, full of emotional drama, or busy playing mind games. Your efforts will just be one more thing to turn him off. If you’re using some “technique’ you pulled off an internet article or book on seduction and trying to look like or act like you are confident, fun, exciting and “sexy”, your efforts leave a bad feeling (suspicion) instead of inspiration.

To be seductive from your very core is first and foremost to seduce yourself. Your seduction style — one that is casually and naturally you and comes from within you and is effortlessly and abundantly there and stays with you day and night, whether you’re with people and or alone — is the magnetism, your attraction factor and is most magnetic when expressed as authentic love.

And when you contemplate those advantages, you’ll wonder why anyone would choose nagging, tricks, manipulation and sex rewards and punishments, when creating particular feelings in him that motivate him to develop his own internally generated and situation-driven behaviour, consistent with his own values and felt wants and desires is so much, well, fun!

In fact, the less time and energy you spend on manipulation and deception or on complaining about how boring your man is, the more energy and time you have for coming up with creative ways to inspire him to action — and the more passionate and magical your relationship will be.

Go trigger emotions and feeling that make him want you more!

PS: If you think all men are inherently stupid and immature, or resistant to change and sexually lazy, and the only thing that keeps them in place is nagging, tricks, manipulation and rewarding and punishing them with giving and withdrawing sex, and you still managed to read this article to the end, I have words of wisdom for you too. You can get work from the beast if you beat it; what you’ll never get is loyalty. Pushed too far, the beast breaks and runs or breaks and bites back. That’s just the way it is.

It’s not too late to start cultivating a sexual magnetism you’ve only up to now dreamed about! Check out my eBook, The Art Of Seducing Out Of Fullness e-Book; learn how to seduce without looking like you’re trying.

10 Emotions That Make Your Ex Feel Attracted To You

Why Is It Hard For Men To Emotionally Connect?