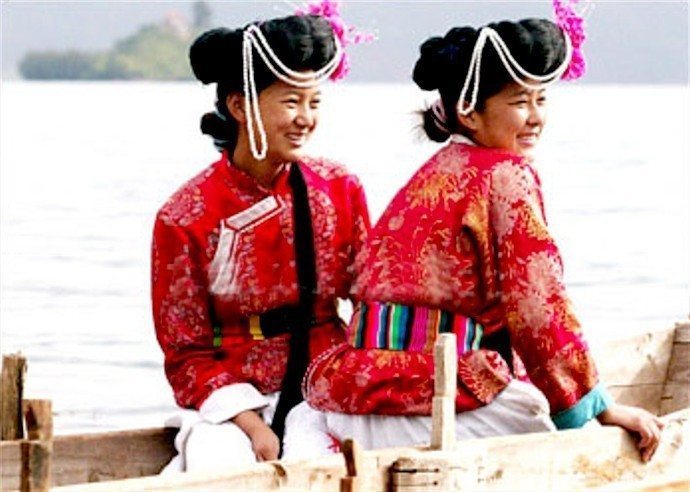 In the Xiaolianghshan Mountains, Yunnan province (South East China), live the Mosuo people, one of the last living matriarchal societies today. They are closely related to Tibetans. In their social system, paternity and marriage are not the same as in our world. The main pillar of the family is the mother.

The family units can join three women generations with their sons. Grandmothers, mothers and daughters can inhabit the same house, without the presence of fathers or husbands. Only uncles, brothers, sons and nephews are happily accepted.

Sex is practiced freely. They only have to choose a partner to spend the night and only incest is forbidden. Typical marriage and fidelity are something like heresy. Obviously, they don’t seem to present signs of jealousy. The western love tragedies of revengeful and victimized lovers make them laugh. They think the visitor is kidding them “How is it possible to end your precious life for something so banal like sex?”

Otherwise, in the Mosuo language doesn’t exist the word “rape” – even if rape does exist – but is less common than in other cultures.

The woman is clearly the center of this culture.

Mosuo homes are designed as four rectangular structures, with an open central courtyard. Animals and humans will live together in this home, with much of the first floor dedicated to housing for the livestock (yaks, sheep, goats, water buffaloes, horses, geese, poultry, pigs).

It is common to have animals wandering in and out of the house all day. The first floor will also have the main cooking area, and the main eating/visiting area. The second floor is used most commonly for storage, and for the private rooms for Mosuo women! (the rest of the family will sleep in communal quarters).

Women and men are grouped in “clubs”. When two young people are attracted by each other, they start a relationship, working together, having social activities and rejoining every evening in a big party center to sing and dance together.

The boys give girls gold, silver or jade jewelry or silk fabrics. The girls donate wood or leather accessories. Older men can also give as presents salted meat, green tea, sugar or wine to young women, in order to achieve the probation of the old women. Once achieved, they are engaged or – properly said – they are a couple. We talk about “walking marriage”. They won’t live together, but instead, they will spend from time to time the night together, all wrapped in secrecy. And at the woman’s will. The men will walk to the house of their ‘partner’ at night, but return to their own home in the morning.

Even if they have sons, he is not a father in the meaning given in our society. He is just the biological father, a procreation tool. The sons belong to her family and the father can only visit them. The uncles deal with their education, care or admonishment, but always with less authority than the mother. Reversely, the children have to care their old uncles.

Few Mosuo women will have more than one partner at a time, even if they are not expected to do so. Mosuo women can change partners as often as they like. In fact, they practice “serial monogamies”, and some relationships can last for a lifetime. So they are not a culture sexually promiscuous as one might think. And “walking marriages” with non-Mosuo are very strongly forbidden.

Mothers are responsible with the family, but they also decide the inheritances and pass the family name. None can interpose a woman’s authority and even less a man.

Of course, they are “ruled” by a queen (photo), 77 years old now. She is more beloved and respected than venerated. This brave woman faced the Chinese communist regime and was subdued to “reeducation classes” and spent 20 years in prison.

Mosuo religion is a mix of Tibetan Buddhism and its own animistic believes, called Daba.

The greatest Mosuo holiday is the Moon New Year. The families kill a pig which is salted and smoked over the roof of their houses.

The meat amount over the roof represent the richness of the family living bellow that roof. Mosuo are famous for their way of preparing pork, and the meat treated this way can hold 10 years.

All the Mosuo working or studying outside come back for this event when great quantities of a kind of strong wine are consumed.

Political power in Mosuo society tends to be in the hands of males, which for many scientists disqualifies them as a true matriarchy, and they would be rather called “matrilineal”.

The result of the Mosuo system is an extremely stable family structure. There are no divorces, child custody (the child belongs to the mother’s family), splitting of property (property is never shared) etc. The large extended family provides care to the child if a parent dies.

Among the Mosuo, since neither male nor female children will ever leave home, there is no particular preference for one gender over the other. The focus instead tends to be on maintaining some degree of gender balance within a household, even by adoption or “children change”.

Tourism has begun to boom in China and the influences of the outside world will be felt.

Mosuo area offers an amazing landscape, beautiful overviews and a hospitable ethnic group with its customs, varied folklore and costumes. Mosuo are really hospitable, offering their houses to the tourists. Moreover, this is maybe the only site in the world where the almost extinct matriarchal system can be contemplated.

With all their fidelity to the traditions, things are changing very quickly, and it is not that uncommon to find at least one or two homes in a village that will have a satellite antenna in their courtyard. Change has a significant impact on Mosuo culture. The cash-based trading system started to leave behind the traditional barter economy.

On the other hand, many Mosuo are very proud of their culture, and still practice many of their traditions.