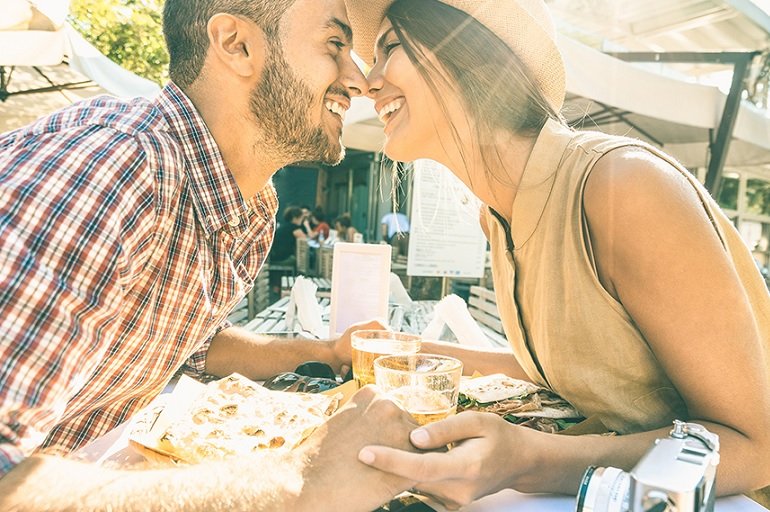 Public Displays of Affection (PDAs) is here to stay – and it’s not just moonstruck teens who are indulging in bouts of public passion.

A survey of students showed that while they view holding hands as a statement of commitment, most would be more comfortable heavy petting in public than giving their date’s hand a gentle squeeze.

Middlesex University psychotherapist Leila Collins says: “We have become more self-conscious and detached, so we see affection less often. Love is a fragile thing, and if there is warmth and affection, then the partnership is more likely to survive.”

Innocent hand-holding, pecks on the cheeks and cuddling are far more important than rampant sessions in the sack, says couples counsellor David Kavanagh.

“Affection is definitely more important than passion,” he says. “The passion in most relationships lasts around three years, but affection can last a lifetime. It allows couples to show they still care for each other after the initial surge of lust has gone. PDAs are a signal that you value and respect your partner — two essential parts of a relationship.”

Now doctors have given loved-up couples another excuse to make a spectacle of themselves in front of family, friends and perfect strangers. Research in the journal Psychosomatic Medicine found that affection can fight stress by reducing levels of cortisol, a hormone implicated in heart disease. So not only do PDAs make you feel all warm and fuzzy inside — they’re good for you too.

But while women are traditionally the ones who value affection, don’t assume that a man who suddenly starts acting all touchy-feely is only after one thing, adds David.

“Men are not socially constructed to act weak or vulnerable,” he says, “but we need affection just as much as women.

“Women wrongly assume that men are thinking about sex all the time. But if they’ve had a bad day, sometimes all they want is a head-rub or a cuddle.

“Walking down the street, a man might find it embarrassing to hold his girlfriend’s hand — yet if he was on the football pitch and scored a goal, it would be perfectly acceptable for him to show all sorts of outlandish PDAs with the other players because the social norms are different. It’s important for the woman not to misinterpret that as rejection.

“That said, if your boyfriend suddenly starts to recoil when you go to give him a hug, it could be an indication that something in the relationship is bothering him.”

He adds: “There’s nothing wrong with sitting down and talking about what type of PDAs you agree on. For instance, one partner might think it’s fine to walk around Superquinn with their hand on your arse, whereas the other would be totally mortified!” Before things get hot and steamy in the frozen foods aisle, remember that less is more when it comes to PDAs.

“You don’t have to be climbing all over each other or putting on some kind of Amsterdam-style sex show to prove you appreciate your partner,” says Hot Press sex columnist Anne Sexton. “Being comfortable enough to stroll down Grafton Street hand-in-hand is a better indicator that your relationship is solid.”

“I would say that holding hands and kissing, to a certain extent, in public is not just acceptable but necessary for longevity in a relationship.”

“The culture of PDAs is only really a recent thing here; previously, there was some notion that PDAs were only for people who either didn’t have a room to go to or were drunk. I think it’s a hangover from our Catholic past, when the parish priest would harangue a couple for holding hands or people would be afraid they’d get a reputation around the village.”

But if it’s a reputation you’re after, sexpert Anne reckons that something as simple as holding hands in public speaks more loudly than screaming the house down in pleasure.

“Couples with a good physical connection outside of the bedroom usually have the best sex lives,” she says.

“If you take Barack and Michelle Obama who are so openly affectionate, you imagine they’re very sexually intimate too — compared to George and Laura Bush, who could almost have been brother and sister.”